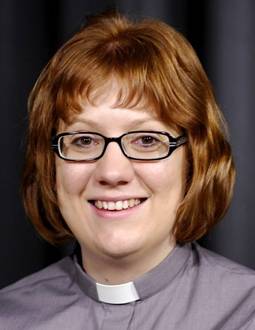 Helen, the youngest of three children was born in Cardiff in July 1978. She graduated with a Bachelor of Divinity from Cardiff University in 1999. Due to her maiden name she was one of the last graduates in the last century !

Helen later became a part time theology lecturer working for Cardiff University, Lampeter University and in, what was, Trinity College Carmarthen. She also worked as an external marker for Spurgeon's Theological College in London and she delivered courses for the Workers Education Association.

In November 2010 Helen moved with her husband Ian to serve in the Diocese of Swansea and Brecon serving in Llandrindod Wells, Gowerton and now in Central Swansea.

Helen is an associate priest in the parish and she also works as the Diocesan Director of Education, a post which she took up in September 2011.