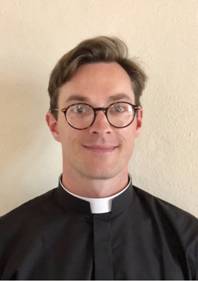 Sam was born in 1987 and raised in the West Midlands. He came to faith in his teenage years and was baptised whilst an undergraduate at Keble College, Oxford, in 2007. Sam had a few jobs before seeking ordination: he was a perfume salesman in Kazakhstan, a marketeer in London, and a teacher of Russian history at Brighton College. In 2014 he returned to Oxford to read for an MPhil in Ecclesiastical History. During these two years he lived and worked as Sacristan of Pusey House, an Anglo-Catholic student chaplaincy at the heart of Oxford. In 2016 he went to St Stephen's House in Oxford for three years of theological training, emerging in June 2019 to be ordained first deacon and then priest. Sam is a keen walker, sea swimmer, and ephemerist. He was married to Helen in 2016, and their son Henry was born in November 2019.