A Brief History of St Mary's

It is often said that the current St Mary’s is the fifth or sixth church on the site. This is an oversimplification. The church has evolved, retaining earlier features while striking out on new courses.

Christianity first reached the Gower through Celtic missionaries. However, it was only with the arrival of the Normans that a church was first built in Swansea, possibly as early as the twelfth century. For most of the Middle Ages, the right to appoint a vicar for St Mary’s and to enjoy the income of the church’s estates was in the hands of the hospital of St David. Adjacent to St Mary’s and founded in 1332, elements of the hospital’s architecture can still be seen in the present Cross Keys pub. The fourteenth century saw the rebuilding of St Mary’s in the Decorated gothic style and by 1343 it is known to have contained at least two subsidiary chapels dedicated to St Anne and the Holy Trinity. 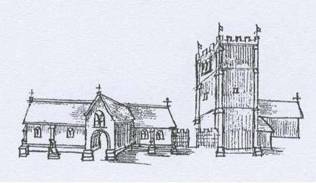 A sketch from 1684 by Thomas Dineley. The church was never in two parts as shown here.

Mediaeval worship and piety flourished until the Reformation. Priests prayed daily for the souls of the dead, and an extensive collection of vestments and metalwork enabled the full panoply of Catholic liturgy until the Protestant changes of Edward VI. Edward’s reign also saw the transfer of the right to appoint the Vicar of Swansea to the Herbert family, through which it eventually found its way into the evangelical Church Patronage Society in 1840. There were extensive changes to the interior of the building and its furnishings during the reformation era from Edward VI to Elizabeth I. For example, vestments were abandoned and vernacular services (in both English and Welsh) were introduced.

St Mary’s was caught up in the seventeenth century (along with the whole of Swansea) in the British civil wars. Revd Morgan Hopkins was ejected for royalist sympathies and had to wait for the Restoration of Charles II to be reinstated. By 1700 significant weaknesses were starting to appear in the fabric of the mediaeval building. This process culminated in the collapse of the nave in 1739. The replacement nave was small and cheap and a constant headache for later generations. Significant enhancements to church life were however afforded by the addition of a new organ in the 1760s, gas lighting in the early 1820s, the benefaction of a valuable baroque painting of the Madonna and Child (1825), and the enhancement of the bells (1720, 1879). 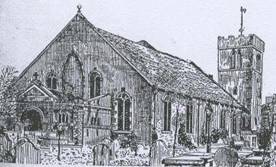 The eighteenth-century nave, designed by Thomas Woodward, with mediaeval tower from the south west.

The Church of England was hampered in its response to the rapid industrialisation and rising population of Swansea from the mid eighteenth century onwards. Ineffective attempts to augment the seating capacity of St Mary’s were eventually superceded in the reign of Queen Victoria by the construction of new churches. Initiated by two dynamic Incumbents, Edward Burnard Squire and James Allen Smith, this ‘Church Extension’ has continued with fits and starts until the present day. The climax of Smith’s ministry was the reconstruction of St Mary’s itself in the 1890s when the fourteenth century chancel and tower with the eighteenth century nave were replaced by a unified Early English gothic design of Sir Arthur Blomfield. 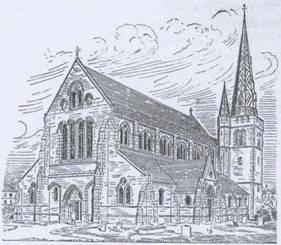 One of Blomfield’s draft designs, showing a spire that was never built

Blomfield’s church was beautified internally throughout the early twentieth century, but tragically burned to the ground in February 1941 as a result of German bombing. Reconstruction took until 1959 to plan and execute. Financial reasons necessitated the design by Percy Thomas and Sons adopt the footprint of the Victorian edifice, although much of the internal decoration reflects more contemporary ecclesiastical art. Rebuilt almost in its entirety, St Mary’s possesses a rare artistic unity, product of the great vision of successive vicars Jack Thomas and Harry Williams.